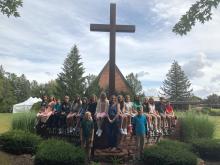 As many of us caught and experienced "Olympic Fever" this past summer, Michigan's "Taylor North Little League Team" provided the residents of Michigan with additional excitement and pride as the team captured the title of “Little League World Series Champions” on August 29, 2021. This baseball team, comprised of 11 and 12 year olds, is only the second team from Michigan to win this championship, with Michigan's first title won sixty-two years ago in 1959.  During an interview with the Taylor North's manager, Rick Thorning, he expressed, "Our original goal was go to the championship and hopefully come home with at least one win!" However, God blessed their dreams far beyond the team's original desire as they are now known as the 2021 Little League World Series Champions! Have you ever experienced those moments when the Lord blessed you far beyond what you ever imagined?

In a similar fashion, God has blessed the beginning of this school year far beyond our expectations! This year, we are so excited to have 50 new students join our St. Matthew family! In addition, every classroom will eventually receive a brand new Smartboard. Also, both outdoor playgrounds have received new equipment that the students are enjoying as they take outdoor breaks from academic instruction that includes the new math series implemented in grades K - 8.  Furthermore, God added to our existing “team roster" of skilled and dedicated staff members by sending us passionate new instructors, such as:

However, an additional significant blessing from God occurred last Sunday during the Congregational Voters Assembly, as the members in attendance elected to retain Mrs. Emily Wagg as our 6th grade teacher! As a result, we are so extremely excited that the Lord made it clear that it is His will for Mrs. Wagg to remain on staff at St. Matthew!

Please join us on Sunday, September 26, during the 8:45 a.m. service as Mrs. Wagg and Mrs. Geary are formally installed as teachers of St. Matthew Lutheran School.

We celebrate and glorify God for all of these wonderful gifts. With the Lord serving as our ultimate "coach", we know that it is going to be a very successful season!

In His Love,
Mrs. Palka